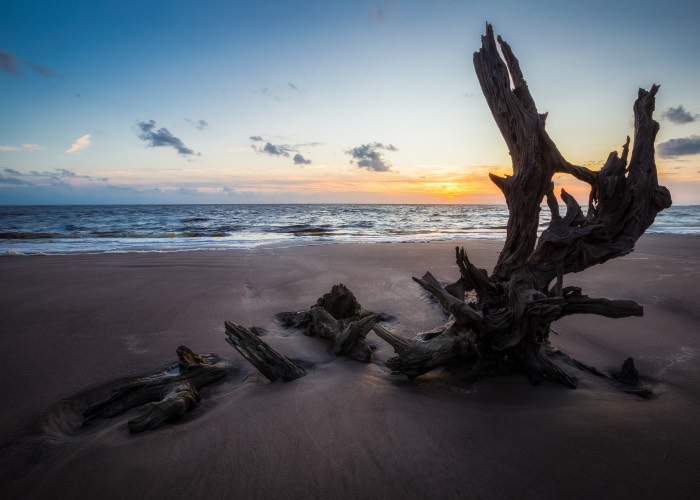 Thanks to its location and complex history, the city of Jacksonville, Florida boasts myriad iconic landmarks. Jacksonville’s most popular landmarks include:

Built in 1929 and situated in La Villa, a historic African American community in Jacksonville, the Ritz Theatre is an iconic move house, particularly among the African-American community of La Villa. The theatre arguably experienced its best years from the 1920s to the 1960s. During this period, some of the most culturally iconic entertainers at the time performed at the theatre, giving rise to its nickname “Harlem of the South.” Today, Ritz Theatre continues to welcome world-renowned performing artists and stage plays.  Ritz Theatre in Jacksonville, Florida

Located north of Downtown Jacksonville along the picturesque A1A highway and managed by the Timucuan Ecological and Historic Preserve, the Talbot Islands State Parks consist of the Little Talbot Island and the Big Talbot Island. The area is an intriguing mixture of coastal woodlands and beach settings, making it ideal for myriad outdoor recreational activities, including kayaking, hiking, camping, fishing, biking, birding, surfing, and beach-combing. Simply put, it is an area of boundless natural beauty and a unique ecosystem.

The Little Talbot Island State Park boasts a four-mile hiking trail through dune covered coastal woodlands consisting of tall pine trees, ferns, moss-covered oaks, as well as a tapestry of natural sculptures resulting from the fallen trunks of palm and cedar. While hiking through the woodlands, keep an eye out for native wildlife species including armadillos, bobcats, marsh rabbits, raccoons, and white-tailed deer. The beach, on the other hand, offers rolling surf and pristine white sand. If you love birding, keep an eye out for native shorebirds including Black Skimmers and Wilson’s Plovers.

Big Talbot Island, on the other hand, consists of secret beaches, bike paths, marshes, and wetlands. Key attractions on the Big Talbot Island include the Boneyard Beach and the Blackrock Beach, which, as their names suggest, have shorelines littered with bleached skeletons of live oaks and beautiful black rocks, respectively. Consisting of compressed sand and decayed leaves, the aforementioned black rocks represent some of the oldest rock formations in the entire world.

When people talk about the Riverside/Avondale district, they often use adjectives such as hip, historic, bohemian, and eclectic. Recognized by the National Register of Historic Places (NRHP) and voted amongst the Top 10 Great Neighborhoods in America, this Jacksonville District offers a unique mix of charm, culture, modern design, and history. One of the key areas in Riverside/Avondale is the “Five Points” area. Located several blocks from the St. Johns River, the “Five Points” area.is essentially a bohemian neighborhood with myriad tourist attractions including, among others, outdoor cafés, funky coffee shops, antique stores, nightclubs, and great local dining. Another key area in the district is the Shoppes of Avondale, which is renowned for its oak-lined, Spanish-moss-covered streets, clothing boutiques, and local cuisine. To enjoy the grand city parks and see the beautiful historic homes spread throughout the district, you can opt for either a guided bike tour or a self-guided tour.

Fort Caroline National Memorial is essentially a replica of the original fort in Jacksonville that was a key battleground between the French and Spanish colonists. More precisely, the French colonists took control of the fort in 1564, only for the Spanish colonists to raid and destroy the fort in the following years, 1565. Today, the replica fort essentially represents the original version of Fort Caroline, complete with flags and cannons. The top levels of the fort offer some of the best views of the St. Johns River, particularly its mouth, in Jacksonville. Some of the fort’s highlights include a 1.3-mile loop trail that winds through hardwood hammock and maritime, as well as a museum, which focuses primarily on the area’s history.

Situated on Fort George Island and managed by the National Park Service, Kingsley Plantation is basically an early 19th-century plantation house complete with its surrounding structures, including slave quarters, a barn, and kitchen house. Built and occupied by the plantation’s slaves, these structures shed light on Florida’s complicated history.

Jacksonville does a great job of preserving important landmarks but when a building needs to be demolished, call on ASAP Demolition for fast results.