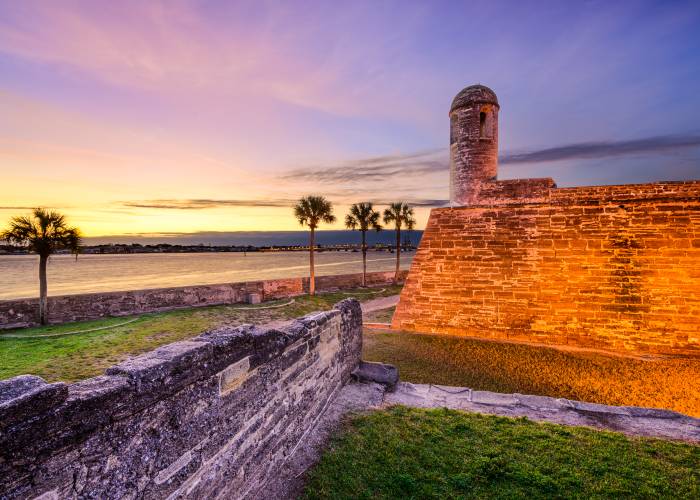 Blessed with abundant natural resources, ocean and river access, and beautiful weather, Jacksonville is one of the most popular relocation destinations in Northeast Florida. In fact, Jacksonville has been attracting settlers to its shores for thousands of years. Consequently, the city has a storied history. Starting from the early European settlers to today’s vibrant metropolis, here’s a detailed look at the history of Jacksonville Florida.

Long before the early Europeans explorers arrived at the place where the St. Johns River drains into the Atlantic Ocean, which is where the modern city of Jacksonville stands today, the Timucuan Indians had settled in this densely wooded area possibly since 500 B.C., according to archaeologists. However, since these Timucuan Indians had no written records, archeologists have so far been unable to trace their origins. In fact, the early accounts of these native settlements came from the first European explorers to discover this area.

In the early 16th century, the European region in general was experiencing a turbulent period. Because of this, many Europeans set sail to seek a better life elsewhere, sailing as far as North America or the “New World.” In 1513 Ponce de Leon landed near St. Augustine, Florida. In 1562, the French Huguenots became the first European explorers to arrive and settle at the mouth of the St. Johns River, just a few miles from the Atlantic Ocean. The French Huguenots named their settlement Fort Caroline. However, just three years later, in 1565, the Spanish raided and destroyed Fort Caroline. By doing that, the Spanish became the new rulers of the region.

Following their victory over the French, the Spanish claimed the Florida peninsula as well as most of the land north of the peninsula. To protect their vast territory from the French, the Spanish established Fort San Mateo on top of French Fort Caroline ruins. The Spanish used Fort San Mateo as part of the missions system, helping them spread Catholicism among natives from St. Augustine, Florida to South Carolina. With the natives working the land to produce food for the Spanish, the Spanish ruled this region for 200 years. Following the end of the Seven Years War in Europe in 1763, the Spanish ceded control of this region to the British in a deal that saw the Spanish retain Havana, Cuba. However, when the Spanish finally left Jacksonville, they took all the remaining Timucuan Indians with them.

In 1763, Spain was forced to cede control of its Florida Colony to the British in a post-war deal that saw Spain retain possession of the city of Havana, which was at the time, a key piece of their New World Empire. When the Spanish left, they took the few remaining Timucuan with them.

Upon taking control of this region, the British took several measures to spur development in the region. These measures included, among others, issuing large land grants as well as establishing plantations along the banks of the St. Johns River to grow rice, vegetables, indigo, and cotton. The British also established a lumber industry with the aim of producing high-grade lumber for building navy ships for the then mighty British Navy. Additionally, the British began the construction of a road from Savannah to St. Augustine. Aptly named King’s Road, this was the first road in the region. These developments led to population growth in the colony as well as explosion of maritime trade. To complete the transformation, the British replaced all Spanish place names with English names. However, despite these developments, the British were forced to hand over the control of this colony back to the Spanish in 1783. However, the Spanish second reign was short lived. A combination of factors, including the decline of the Spanish Empire, drove the Spanish to cede control of the colony to the United States in 1821.

In 1821, Florida officially became a part of the United States. At this time, the plantations established by the British along the banks of the St. Johns River had become major economic centers, meaning the colony needed a proper town. In 1822, two settler donated land at a place called Cowford to establish a town. Located at the north short of the St. John’s River, Cowford was renamed Jacksonville in 1822 in honor of Andrew Jackson, the region’s first provisional governor, who later became the seventh president of the United States. Before Florida attained statehood in 1845, Jacksonville had already established itself as the main trading town in Florida.