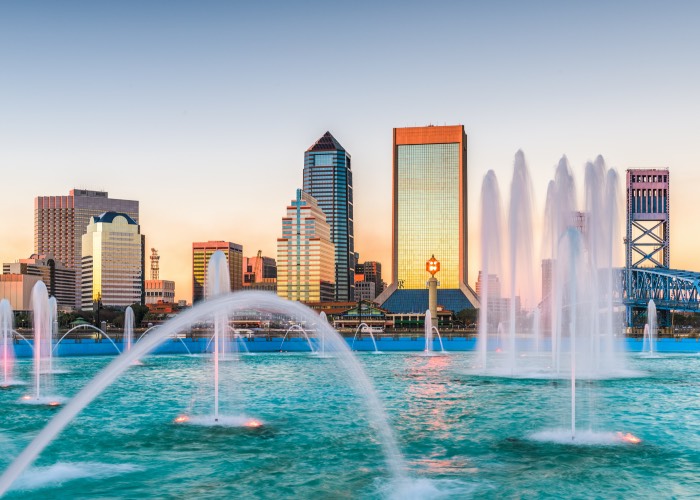 Over the past few decades, Jacksonville, Florida has become a highly sought after destination for businesses with numerous national and multinational companies choosing the city as a base for their regional or global headquarters. There are a number of reasons for this including a large, highly skilled workforce, the affordable cost of living, and the numerous beaches, parks and office buildings in and around the city. From homegrown businesses to international corporations, these are the biggest companies with headquarters in Jacksonville.

CSX is one of the nation’s leading transportation suppliers with over 20,000 miles of railroad tracks that span 23 states as well as the District of Columbia and the provinces of Quebec and Ontario in Canada. For nearly 190 years, they have been providing traditional railroad service as well as transportation of trailers and containers. In 2003, they moved their headquarters to Jacksonville and since then they have been running operations from their 250-foot high rise building in Northbank overlooking the St. Johns River. They employ over 1,500 people in Northeastern Florida alone.  CSX Headquarters 550 Water Street Jacksonville, FL 32202

Most Americans have heard of Fidelity National Financial, as this title insurance company consistently earns a place on the Fortune 500 list as one of America’s largest companies. They employ over 55,000 employees across the country who work with settlements and insurance in the real estate and mortgage industries. They moved their headquarters from California to downtown Jacksonville in 2003. The 13-story building was constructed by Haskell and includes green glass windows that maximize natural light, a five-level parking garage and underground parking, and an uninterrupted power supply for advanced security. See more about Fidelity National Financial in Jacksonville.

Firehouse Subs is a homegrown company that was founded in 1994 by two firefighter brothers, Robin and Chris Sorenson. The original sandwich restaurant paid homage to firefighting with a custom mural featuring firefighters and submarine sandwiches with names like the Hook & Ladder and Firehouse Hero. The restaurant was a hit, and since then the brothers have gone on to open over 1,100 restaurants across the States and in Puerto Rico and Canada. Each restaurant has its own custom mural depicting its city or community that is hand-drawn and painted in the company headquarters, which remains Jacksonville.  Firehouse Subs Headquarters Pkwy #150, Jacksonville, FL 32258

Southeastern Grocers is a holding company for four different grocery store brands: Winn-Dixie. Harveys Supermarket, BI-LO, and Fresco y Mas. It was formed as a parent company in 2013 and since then it has used BI-LO’s former Jacksonville offices in the Prominence Office Park as the headquarters for all four brands. Today it is one of the largest supermarket companies in the United States and it employs over 5,700 people in northeast Florida. You can find multiple Winn-Dixie, Harveys Supermarket, and Fresco y Mas locations across Jacksonville and Florida.

With over 250 companies in their diverse portfolio, Johnson & Johnson is a household name around the world. Johnson & Johnson Vision is one of their companies that is dedicated entirely to eye health with vision products for protection, treatment, correction, and enhancement. The company actually has dual headquarters in Jacksonville and Santa Ana, California and they employ over 10,000 employees across the globe. The Jacksonville headquarters is located on Centurion Parkway North and it focuses on R&D, contact lens business, and manufacturing.

The GATE Petroleum Company was founded in 1960 with the mission of reselling fuel to residential accounts and today it operates in a diverse range of industries that include retail gas and convenience stores, construction materials, real estate, car washes, and more. The company employs over 3,000 employees in Northeast Florida and aims to give back to the communities it serves with corporate philanthropy and volunteer services. The headquarters is located on San Jose Boulevard.

It is easy to see why so many companies choose Jacksonville for its headquarters. The city is one of the fastest-growing in the state for its comparatively low cost of living and high quality of life. In addition, Jacksonville is a southern port city with easy access to other regional ports and it is fast becoming a financial and technology hub. The corporate-friendly tax structure adds ease to doing business, and the wealth of young workers in the region who are highly trained and experienced means it is easy to find employees from entry-level starters to management personnel.

ASAP Demolition company in Jacksonville is proud to provide information about these other Jacksonville companies.